Goatchurch is a large and interesting cave in Burrington Combe about 30 mins south of Bristol. If you are completely new to caving Goatchurch offers a great opportunity to explore underground. What makes it so great is that it has a very simple route that leads between two entrances that can be achieved by everyone and from that simple loop it’s possible to explore further into the cave for those that want a greater challenge. Goatchurch is also a great cave if your group is a mixture of abilities as a lot of the toughest sections can be bypassed.

For younger explorers Goatchurch is an ideal introduction to caving with a huge range of climbs and squeezes.

Swildons Hole is one of the best caves in Britain. The cave entrance is on the top of the Mendip hills 40 minutes south of Bristol 55 minutes from Bath situated near the village of Priddy. For most of the year a stream sinks into a rocky cleft below a concrete blockhouse which can look a little daunting the first time you see it. The water that cascades into the entrance of Swildons Hole isn’t seen again on the surface until it re-emerges in Wookey Hole some four miles away. We join that water on part of it’s journey as it twists and winds through an amazing array of passages.

This very large cave system offers cavers the possibility of a number of different trips underground. Even as a relatively inexperienced caver you will be able to enjoy the ‘Upper Series’ of Swildons, first following a series of dry passages and then as your confidence and experience increase we will tackle climbs and squeezes in the main stream way whereyou will get increasingly wet.

For those people who have some previous experience underground the next step is to try and reach Sump One. A sump in a cave is where the roof of the cave passage meets the water and the only way on is to submerse yourself fully, hold your breath and pull yourself through. The route down to sump one involves lots of climbing and scrambling down cascades and is one of the best underground stream ways in Britain being both beautiful and full of challenges.

And for the ultimate trip for people who have conquered the sump, the ’Round Trip’ offers a bit of everything, climbing squeezing and tight flooded passages. This is a trip not for the faint hearted. After 3-4 hours of hard caving you will find yourself on the far side of the sump, diving back through it is the only way out. 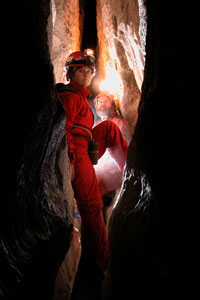 Manor Farm cave is located near Charterhouse on top of the Mendips 40 minutes south of Bristol. The entrance is a 16m deep shaft which we abseil into. This is quickly followed by two more vertical sections of cave, where we will abseil eventually arriving in the stream way.

Similar in nature to Swildons Hole, but not quite as pretty, the stream way cascades deep under the Mendips until it appears to end when the cave ceiling comes down to meet the gravel floor. But above this point is one of the most spectacular chambers in the Mendips. 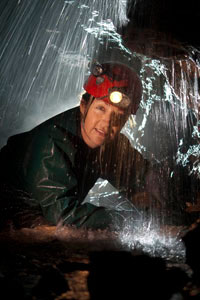